Visitors are very welcome at the Weizmann Institute of Science, and tours are available from Institute staff by advance request.

Personalised visits can also be arranged, guiding you to particular locations of interest – whether you would like to visit the laboratories, speak with particular scientists or learn more about certain research undertaken at the Institute.

You can also virtually visit the campus by watching the videos on this page here. 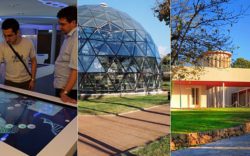 “The main building, with its stately entrance and well-equipped labs, seemed to me a temple of science. I went home and told my parents this is where I wished to study and work.”

Professor Ruth Arnon, who began her journey with the Weizmann Institute as a student in 1960, and later went on to become Vice President of the Institute.

To truly understand the unique place that is the Weizmann Institute of Science, you need to see it for yourself. It has been said that people who develop a life-long relationship with the Institute often do so after a single visit.

The dynamic culture of the Institute is immediately palpable, and the scientific developments taking place within the Institute walls can become profoundly inspirational to those who enter through the main gate in Rehovot, Israel.

Whilst the Institute campus is a living museum of architecture, it is the larger than life demonstrations of science within the campus grounds that equally inspire. A stroll through the Institute is like entering an interactive scientific micro-universe that tickles your curiosity at every turn.

The starting point for any visit to the Weizmann Institute should begin at the Clore Garden of Science (the Clore Gardens). Within this scientific playground you can make waves of water, play rock music; or view full-circled rainbows by day or even, by night. These features represent just a few of 50 large-scale interactive exhibits on display within this picturesque 2.2 acre park – the first open air museum in the world.

The Clore Gardens offers far more than a collection of upscaled copies of didactic, desk-top models of scientific phenomena. Seven themed ‘courts’ are devoted to various scientific experiences that will take you into the sky as you grapple with a giant yo-yo, onto a human turntable as you experience the law of conservation of angular mass, and through the air on a human-pendulum in the Court of Motion.

A stroll through the various dimensions of science is not simply limited to the magnificent Clore Gardens. Across the other side of campus you can walk through the Solar Complex, made up of some 64 mirrors all controlled by computers, which calculate the sun’s position relative to the earth for every second of the year. Did you know that forty minutes of sunlight is all it takes to meet the energy demands of the earth’s inhabitants for an entire year? You can find out similar solar facts at the Solar Complex, home to exciting scientific advances in satellite communications.

It is the architecture however, that has inspired many books and so many individuals over the years. Showcasing a stunning collection of edifices built in the variety of styles current between 1934 and today, the Weizmann Institute is home to some of the main crossroads in Israeli architecture. Middle-Eastern motifs meet with Brutalism’s exposed concrete forms – Structuralism, Normalism, Postmodernism and Glass Architecture, which mixes and merges with the Institute’s most recent contemporary additions.

Extravagant for its time, this stately home was built between the years 1936-37. Each window frames the sea on one side, and the Judean Hills on the other. Fine chinaware still remains in its opulent rooms, alongside an extensive and lavishly furnished library, and even a swimming pool – modest by today’s standards but perhaps a luxurious addition for its era. Visitors are encouraged to walk through this historical home, near to where Dr Chaim Weizmann is buried, as he requested, close to the house he loved.